Over the course of the pandemic, artist Atefwepwawet has been at work on a series of illustrations that focuses on animal manifestations of the Netjer and other gods.

These beautiful digital paintings are evocative, reverent, and replete with symbolism: every element in the picture is a piece of the divinity’s portrait, and the viewer can’t help but be moved to awe and contemplation.

Below is a short interview with Atef about the series. 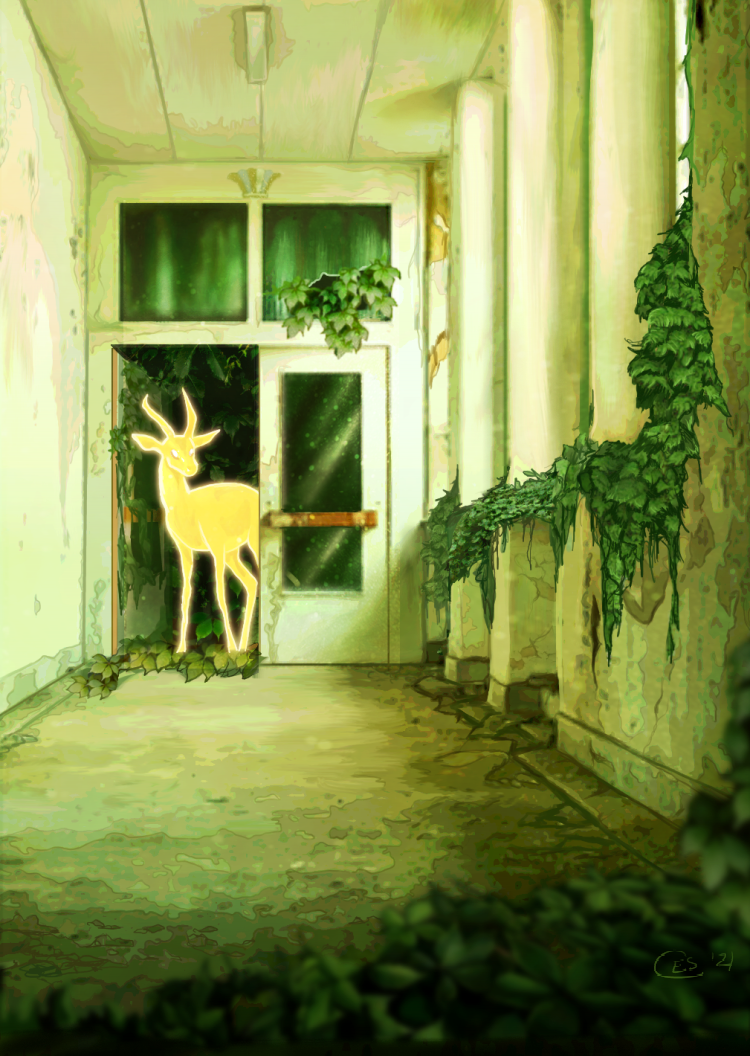 WHAT INSPIRED THESE WORKS?

In this case, it was Who rather than what. The first one in this series–of a lioness standing in temple ruins facing the sunrise–was inspired by Sekhmet. It’s extremely rare that I receive any nudges from the gods on the style or contents of my devotional art, but this was an exception. Everything from the subject matter to the composition to the color scheme was essentially picked out for me, and at first I was grateful because it seemed easier; it meant I had to make fewer decisions. But it was also stressful because it involved drawing architecture, which is something I’ve always struggled with, and is conspicuously absent from my art prior to this point.

YOU’VE GONE FOR A SPECIFIC SYMBOLIC AESTHETIC THAT I THINK YOU’VE PERFECTED. WAS THIS A DELIBERATE DECISION OR WERE YOU UNCONSCIOUSLY MOVED TO CREATE IMAGES LIKE THIS?

Thank you for the kind words — I’m glad that this aesthetic was visible to you as well, and wasn’t just in my head! One of the main themes I’ve tried to present in this series is that we can catch glimpses of the gods everywhere, even in the forgotten, neglected places. Nowhere is inaccessible to Them, and They’re not somehow confined to our shrines. That’s a great comfort to me. It’s also my admittedly odd hope that these pieces are just a little unsettling to the viewer. The gods are multifaceted and encompass aspects that we may find frightening or discomforting, and Their more unnerving aspects are just as vital to who They are as Their more cheery and lighthearted ones. That’s also why the landscapes of these pieces are often liminal spaces, like abandoned temples or empty overgrown hallways. Those places unnerve me, at least!

WHAT’S YOUR PROCESS FOR THESE?

The subjects of the majority of these have actually been requests from other polytheists, and since devotional art is both a service to the gods and to my community, I enjoy prioritizing those. (I’ll also get nudges from the less commonly-worshipped deities, which is how I ended up drawing the most recent one of Anuket.) As for the painting process itself, I say a prayer as I begin, but otherwise it follows the same steps as most of my art: composition test, monochrome thumbnail, and then painting. Once it has been completed, I offer it in ritual along with standard offerings (cool water, bread, etc.) and hymns. If I feel the art has been accepted, I’ll then post it online as well.

WHAT’S THE FUTURE OF THE SERIES? DO YOU HAVE ANY OTHER KINDS OF WORK IN THE PIPELINE RIGHT NOW?

Good question! I’ve got a long request backlog, including for many deities outside my devotional practices, so I’ve got a lot of research ahead of me.My other major project in the works is a set of illustrated spells inspired by the Book of Going Forth by Day (i.e. the “Book of the Dead”). Over the centuries, some of the written spells for the deceased’s transfiguration and navigation of the Ancient Egyptian underworld began to be replaced by wordless illustrations that carried the same power and meaning. I’d like to try my hand at illustrating some of those in my own style. I got the strong impression that these need to be done in traditional media as opposed to my usual digital, so it’ll be another good way to step out of my comfort zone! This project is being supported by Wepwawet and Anpu–both psychopomps between the world of living and dead–so I’m curious how this project will turn out, or if They have other ideas for it.

FOR MORE ART FROM ATEFWEPWAWET, BE SURE TO TAKE A LOOK AT THEIR WORK ON TUMBLR.